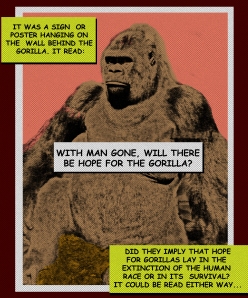 This post was inspired by the book Ishmael by Daniel Quinn. Its description on Wikipedia reads:

It examines mythology, its effect on ethics, and how that relates to sustainability. The novel uses a style of Socratic dialogue to deconstruct the notion that humans are the pinnacle of biological evolution. It posits that human supremacy is a cultural myth, and asserts that modern civilization is enacting that myth with dangerous consequences.

I am currently re-reading this book after four years and I find it as thought-provoking and well-written as I did when reading it with fresh eyes.

The following excerpt is about how Ishmael (the gorilla) introduces the topic of his lesson  to his new pupil: the unnamed narrator.

There are times when having too much to say can be as dumbfounding as having too little. I could think of no way to respond adequately or gracefully to such a tale. Finally I asked a question that seemed no more or less inane than the dozens of others that occurred to me.

“And have you had many pupils?”

“I’ve had four, and failed with all four.”

He closed his eyes to think for a moment. “I failed because I underestimated the difficulty of what I was trying to teach—and because I didn’t understand the minds of my pupils well enough.”

Ishmael selected a fresh branch from a pile at his right, examined it briefly, then began to nibble at it, gazing languidly into my eyes. At last he said, “On the basis of my history, what subject would you say I was best qualified to teach?”

I blinked and told him I didn’t know.

“Of course you do. My subject is: captivity.”

I sat there for a minute, then I said, “I’m trying to figure out what this has to do with saving the world.”

Ishmael thought for a moment. “Among the people of your culture, which want to destroy the world?”

“Which want to destroy it? As far as I know, no one specifically wants to destroy the world.”

“And yet you do destroy it, each of you. Each of you contributes daily to the destruction of the world.”

I shrugged. “Frankly, we don’t know how.”

“You’re captives of a civilizational system that more or less compels you to go on destroying the world in order to live.”

“So. You are captives—and you have made a captive of the world itself. That’s what’s at stake, isn’t it?—your captivity and the captivity of the world.”

“Yes, that’s so. I’ve just never thought of it that way.”

“And you yourself are a captive in a personal way, are you not?”

Ishmael smiled, revealing a great mass of ivory–colored teeth. I hadn’t known he could, until then.

I said: “I have an impression of being a captive, but I can’t explain why I have this impression.”

“A few years ago—you must have been a child at the time, so you may not remember it—many young people of this country had the same impression. They made an ingenuous and disorganized effort to escape from captivity but ultimately failed, because they were unable to find the bars of the cage. If you can’t discover what’s keeping you in, the will to get out soon becomes confused and ineffectual.”

“But again, how does this relate to saving the world?”

“The world is not going to survive for very much longer as humanity’s captive. Does that need explication?”

“I think there are many among you who would be glad to release the world from captivity.”

“What prevents them from doing this?”

“This is what prevents them: They’re unable to find the bars of the cage.”

Ishmael smiled again. “Since I have told you a story that explains how I come to be here, perhaps you will do the same.”

“I mean, perhaps you will tell me a story that explains how you come to be here.”

“You may have any number of moments,” he replied gravely.

Needless to say, I highly recommend this book.

1 – I will be away for the next month or two. So I will probably not be able to moderate any comments from new readers. Sorry about this.

2 – For those who are interested, the gorilla in the comic is the specimen in the Natural History Museum in London. His name was Guy the Gorilla; you can read his cool history here.