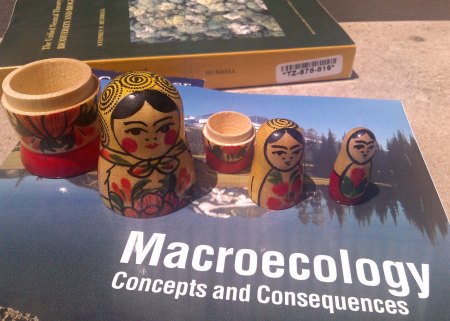 No matter at which scale you look at it, nature is remarkable.

Like many others, I was taught ecology in a very hierarchical way: individual organisms are part of a wider populations of species, collections of species form communities and communities come together to make up ecosystems. Similarly, single trees are nested within forests, which aggregate to form biomes. I’m sure you can come up with many comparable examples.

The trouble with such neat spatial hierarchies is that they lure us into believing that if patterns appear similar at several different spatial scales, then the processes leading to these patterns should also be similar. It’s so easy to assume that nature is like a set of Russian Dolls: each daughter exactly the same as its mother, only slightly smaller. But this is not necessarily the case.

Instead, it is much more likely that the importance of different ecological and evolutionary processes vary with scale (see examples here and here). For example, while habitat type (forest vs. savannah vs. desert) is important in explaining the distribution of species across a continent, the distinction between habitat types is of lesser importance to individual organisms searching for food on the forest floor. Here, factors like resource availability, competition and predation are much more likely to determine the local-scale distributions of species.

To complicate things even more, processes acting at one scale can influence the patterns observed at another. For instance, speciation and historical dispersal determine how many species can be realistically occur in a specific locality. These biogeographical processes add species to a regional species pool over long periods of time. In the Origin of Species, for example, Charles Darwin famously compared Australia, southern Africa and South America and concluded that “…we shall find parts extremely similar in all their conditions [i.e. climate and habitat conditions], yet it would not be possible to point out three faunas and floras more utterly dissimilar.”

Knowing this, ecologists have devised clever ways of comparing ecological patterns at different geographic localities, while simultaneously accounting for differences in the regions species pool. Without going into detail, these methods include plotting local diversity against regional diversity and interpreting the shape of the relationship or using reshuffling algorithms to compare observed local patterns to those expected from random sampling of the regional species pool.

None of this should be new to the majority of macroecologists because these techniques have been around for decades. However, more recently there has been a resurgence of studies aimed at identifying biogeographical regions with relatively homogeneous faunal assemblages (examples here, here and here). I’m of the opinion that these new studies are the result incredible advances in data availability, analytical techniques and computing power over the last few years. Unfortunately, this recent technological explosion has not been followed by a similar outburst of ecological theory.

So while theories for linking local communities to the regional species pool are well-developed, we now find ourselves with a relatively modern macroecological pattern – the biogeographical species pool – without clear ways of linking it back to smaller scales.

I don’t have the solution to this problem, but I am convinced that the solution is not to adapt the current techniques for use at larger scales. My argument is based on the view that processes at the biogeographical scale are fundamentally different to those within the regional species pool. Along with a pair of collaborators, I outline this argument in a perspective piece (open access) that has just been published in Frontiers of Biogeography. 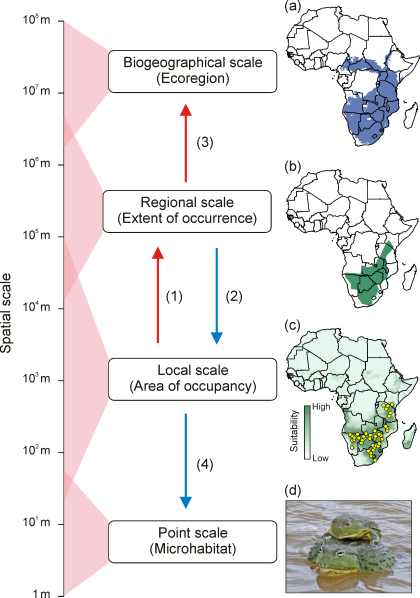 The main aim of the article is to highlight the reasons why macroecology and biogeography need to develop new theories to link patterns both within and across regional species pool. I’ll be the first to admit that some of the arguments are very speculative and that many of you will not agree with some of our approaches. It is for this very reason that I am grateful to the International Biogeography Society for providing an outlet for these possibly unconventional viewpoints. Nevertheless, if you click through, read the article and care to comment on something, feel free to get in touch. I’d really appreciate it.

2 thoughts on “The scalability of macroecology”